How to read hydraulic circuits

Hydraulics schematic symbols are a basic component of hydraulic circuit. Symbols for hydraulic systems are for functional interpretation and comprise one or more function symbols. Hydraulic symbols are neither dimensioned nor specified for any particular position.

The following list is contains hydraulic schematic symbols to DIN ISO 1219. This list is designed as ad aid for creating symbols.

Pipelines on hydraulic circuits are shown with lines connecting the elements.

The control lines are represented by a dotted line.

The direction of fluid flow is indicated by arrows, if necessary. Some lines are designated by letters:

The connection lines are shown by a shaded point.

If the lines intersect in the diagram but are not connected, then an arc is drawn at the intersection point.

Hydraulic fluid is placed in the tank. The tank connected to the atmosphere is shown on the hydraulic circuit.

A closed tank, such as a hydroaccumulator, is shown as a closed loop.

The filter is depicted in the form of a rhomb with a dotted line. This is the line that symbolizes the filter element.

The symbol for the pump is the circle within which a filled triangle (arrow) is drawn. This triangle shows the direction of movement of the fluid. pumps are indicated by a circle, with a triangle arrow indicating the direction of fluid flow.

If the pump shows two triangles, then this is a reversible pump.

If the pump symbol has an arrow drawn diagonally, then this is a variable pump.

If the symbol shows two triangles, it is a reversible hydraulic motor. 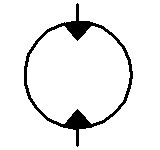 If the arrow is diagonally drawn on the symbol, then it is a variable hydraulic motor.

On the double-acting hydraulic cylinder symbol, lines of fluid supply to the piston and rod cavity are shown.

A hydraulic cylinder with a plunger (single acting) is shown as: 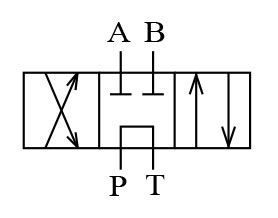 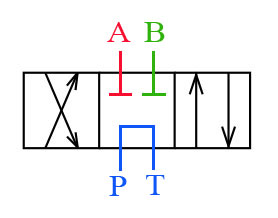 The directional valve can switch by connecting other channels.

On the square to the left, it is shown that when the valve switches, the lines P and B, A and T will connect. This conclusion can be made by virtually moving the directional valve to the right. 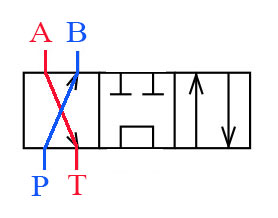 On the square on the right, it is shown that when the directional valve switches to another position, the lines P and A, B and T will connect. 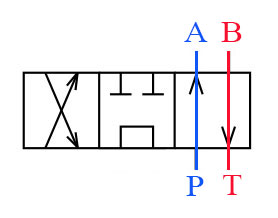 The operation of the directional valve is shown in the video.

To switch the valve, you need to move the spool. This can be done in various ways. 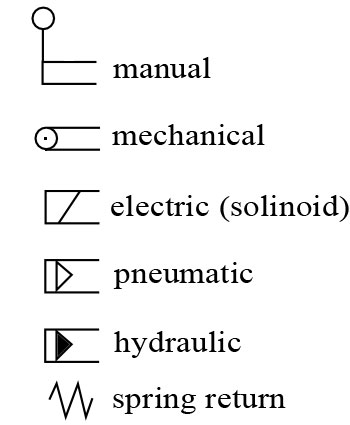 The figure shows the symbol of the pressure relif valvee.

The arrow inside the square indicates the direction of flow of the fluid.

The spring force should be higher and the valve will open.

The check valve allows fluid to flow in one direction, and shut off its flow in the opposite direction. This is also shown in the circuit.

When the liquid flows from top to bottom, the ball (circle) will slide from the saddle, indicated by two lines.

When the fluid flows from below - upward, the ball will press against the saddle, and will not allow the fluid to flow in this direction.

The symbol of the check valve may depict a spring that presses the ball to the saddle.

Possibility of regulation, is shown by an arrow. Adjustable throttle is designated as: 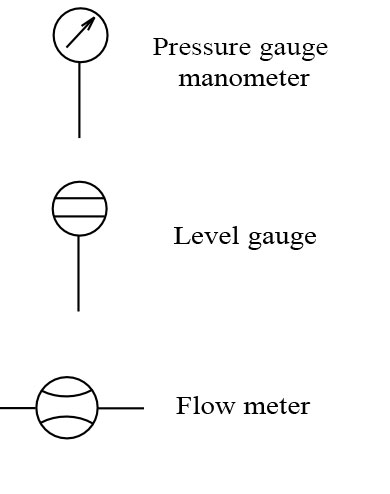